Whole Earth has been designing and selling its own t-shirts for a very long time. The below photo dates from 1977 and our only venture into publishing a printed catalog. We’ve created lots of t-shirt designs over the years and periodically we’ll visit the archives and bring back a classic. Look closely and you’ll see two designs that are available today – Bears and Optics. 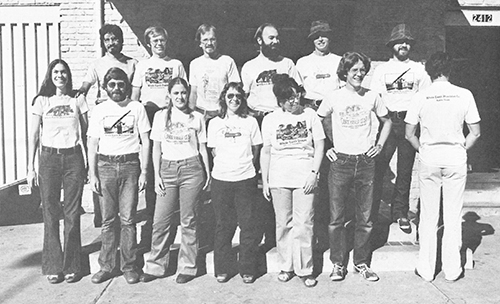 Back in the early days of Whole Earth, a few members of our staff were also reps for some of the early outdoor gear companies, including Patagonia and Trailwise. Trailwise was a major source for modern, lightweight backpacking and climbing gear. Originally manufactured for The Ski Hut, a legendary Berkeley outdoor store, Trailwise gear was also offered in stores like Whole Earth. Our collective memory says that the Bears came from a Trailwise catalog.  The Grizzlies may have originally been an illustration in a 19th century book on wild animals. The Bears have been a customer favorite for several generations, and we’re proud to offer them in exciting new colors.

The Optics t-shirt was created to celebrate our branching out into a new line – telescopes! And while our days of selling telescopes have come and gone, this t-shirt remains popular. The image dates from the late 19th century and shows the great James Lick 36 inch refractor telescope at the Lick Observatory on Mount Hamilton in California. It was the first permanently occupied telescope built on a mountain top where it was hoped that atmospheric and light interference would be reduced. Earlier telescopes had been built in cities. Astronomy and star parties are popular here in Texas where our stars at night really are big and bright out in Hill Country and in the Davis Mountains, home to the McDonald Observatory.

Our Possum t-shirt dates back to 1976. It first saw the light of day as an in-house t-shirt created for the Whole Earth Bicentennial Bash out at Possum Ranch in Hill Country. Nancy McGowan, a wildlife artist who illustrated books for university presses, publications for Texas Parks & Wildlife and picture books for children, created the artwork. When our t-shirt team went on the hunt for new designs several years ago, Possum was a favorite and was chosen to make its public debut almost 40 years after the Bicentennial party. 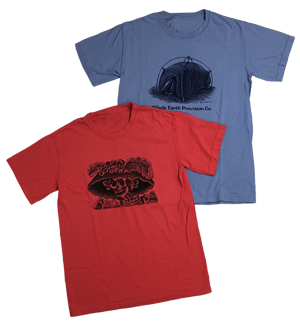 Perhaps the most iconic Whole Earth t-shirt image is the Armadillo Tent created by legendary Austin artist, Jim Franklin. He’s best known for his Armadillo World Headquarters’ music posters and as a master of Armadillo transformations. In Franklin’s art, armadillos are squeezed out of paint tubes, hatch from eggs, levitate over the highway, and score touchdowns masquerading as footballs.  So in Franklin’s world, there’s really nothing at all unusual for an armadillo to be comfortably settled in his own armadillo tent. As best we can tell, this shirt has been continuously available since the late 1970s, a true classic.

Our last two Whole Earth t-shirts are based on the work of José Guadalupe Posada, a Mexican printmaker of the late 19th and early 20th centuries whose popularity in this country has grown along with that of Día de los Muertos, the Day of the Dead. Posada’s work is filled with skeletons. His most famous is La Catrina, the smiling skull wearing an exquisitely decorated hat covered in plumes, flowers and lace. This shirt is a year-round favorite, but it definitely shines in late October for Halloween and then Day of the Dead. The same is true for the Dancing Skeletons who are having a fabulous time celebrating fiesta or fun-filled Friday night. 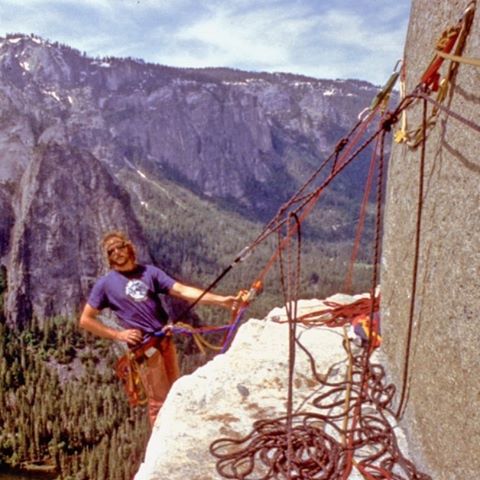 These six designs represent our current crop of classic Whole Earth t-shirts. They’re made of 100% cotton and screened locally here in Austin. We love seeing photos of you on your travels in Whole Earth t-shirts. Here’s one of our favorites. This is James Crump of Texas Climbers Coalition, formerly Central Texas Mountaineers, on the Nose of El Capitan in Yosemite back in 1980, looking good in a classic Big Blue Marble Whole Earth t-shirt. Which design will you wear?