For some couples, it’s love at first sight. For others, love develops more slowly, like the gradual shift of the seasons from winter to spring. A day comes when the couple realizes their relationship has changed. Friendship has transformed into something deeper, richer and full of possibilities.

When people work together and share the inevitable ups and downs of the daily drama playing out in the modern workplace, it can create fertile ground for co-workers to become more than just friends. Whole Earth Provision Co. has had its share of love stories. We’ve been bringing people together for almost 50 years, so it’s no wonder that there are Earthlings who have found their soul mates in our stores, the office and the warehouse. 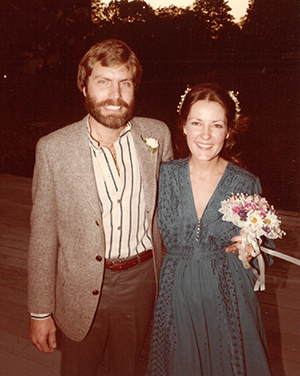 One of our longest Whole Earth love stories began back in 1980, at the Campus store in Austin. Kathy McCarley was our clothing buyer, and Bert Peeples, a Christmas hire, who soon became a fulltime member of the staff. Bert was our first Clothing Lead, wrangling clothing from the warehouse to the sales floor as needed. At the time, rugby shorts were astonishingly popular and difficult to keep in stock. Bert and Kathy “met” in the shorts aisle in the warehouse, then located at the Campus store. Their joint effort to keep Austin in Rugby shorts was the beginning of a relationship that is still going strong. Kathy is now our General Merchandise Manager. Bert managed stores in Austin and Houston and finished out his career at Whole Earth as our Outreach Coordinator. 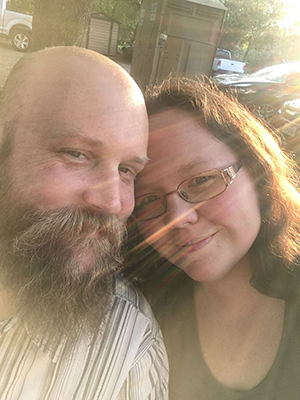 Another Whole Earth romance is that of Johanna and Neil Schmidt. Both worked for a time at our Westgate store. Though Neil left to finish school in Nacogdoches and Johanna moved to Costa Rica to teach, they stayed in touch through a group of mutual friends. They will celebrate their 10th wedding anniversary this coming March. Johanna went on to manage the Campus store and then came to the office where she now heads up the Marketing and Promotions team. Johanna and Neil are the proud parents of two kids, members of the next generation of Earthlings by birth. One daughter even shares the same birthday with Whole Earth, December 14th. 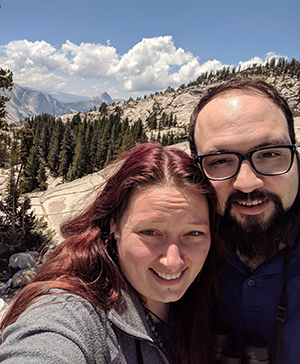 Rani and Ray Loyal met six years ago at our Post Oak store in Houston. Ray was Manager, and Rani, a Toy and Gift Lead. Ray has since left the company, but Rani is now an Assistant Manager in our San Antonio store. Like many Earthlings, they took advantage of working at Whole Earth to gear up for all sorts of outdoor activities and then hit the road for far flung adventures. In 2017, while traveling through the desert Southwest, Ray popped the question at Grand Staircase-Escalante National Monument. On their honeymoon, they traveled west once again spending time in San Francisco and then heading off to experience the glories of Yosemite and Sequoia and Kings Canyon National Parks. 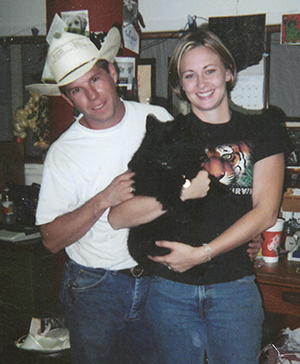 Our Whole Earth love stories even include the next generation. Alana and Brittan Hussing have spent their entire lives associated with Whole Earth. Alana’s aunt, Susan Souby, heads up our Accounting office. Brittan’s dad, Lewis, is Whole Earth’s Construction Manager. Despite their life-long connections with Whole Earth, the two did not meet until 1999, at our office. Today, Alana is our Benefits Coordinator and Brittan, the Facility and Maintenance Coordinator. They’re married and have a daughter, a member of the third generation, who spent her first months of life at the office, like many other members of her Earthling by birth generation.

These are only a few of our Whole Earth love stories. Over the years, many people have come to work with us and found that very special person with whom to share their life. We hope that love will continue to flourish among us for many, many more years to come.