This month’s Whole Earth Hero is Theodore Roosevelt. We’ll also catch a glimpse of an upcoming Hero, John Muir. This photograph below was taken in 1903, when President Roosevelt, the conservation president, and John Muir, author, advocate for national parks and founder of the Sierra Club went camping together in Yosemite. Both men played major roles in expanding our national park system. Muir through his writings and advocacy spurred enthusiasm for the creation of more parks, while Roosevelt during his time in office established five national parks, 18 national monuments, 55 bird and game preserves, and 150 national forests. He protected nearly 230 million acres as public lands. That’s almost as much land as in Texas, Louisiana and Arkansas, combined.

The visit to Yosemite was part of Roosevelt’s Great Loop tour, a 14,000 mile, cross-country, round trip that included a visit to Yellowstone with John Burroughs and his first glimpse of the Grand Canyon. Roosevelt wanted to meet Muir in Yosemite for an outdoor adventure. He wrote: “I do not want anyone with me but you, and I want to drop politics absolutely for four days and just be out in the open.” Roosevelt had read Muir’s writings, and knew that he would be the best guide to the wonders of the Sierras. 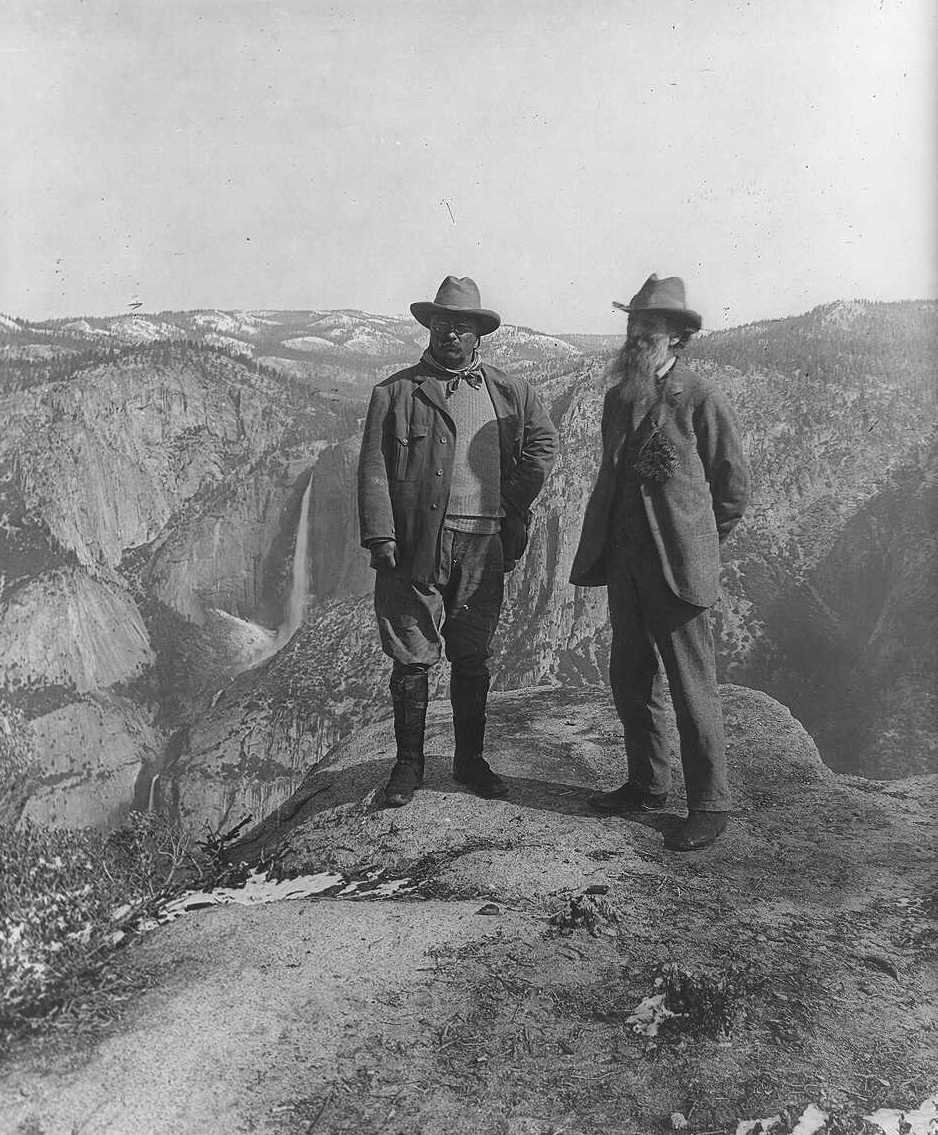 Their first stop in Yosemite was the Mariposa Grove, home of the ancient Giant Sequoias. Roosevelt said that it was the greatest forest he had ever seen. Muir had written in Harper’s in 1878, “Walk the sequoia woods at any time of year, and you will say they are the most beautiful on earth.” Face to face with these giants, Roosevelt agreed. Later, in his Autobiography, Roosevelt described the Sequoias: “The majestic trunks, beautiful in color and in symmetry, rose around us like the pillars of a mightier cathedral than ever was conceived even by the fervor of the Middle Ages.”

That evening they camped in the snow, fed the campfire, and talked long into the night about glaciers, Sequoias and conservation. Douglas Brinkley believes that it was “the most famous campfire ever in the annals of the conservation movement.”* They agreed that the Yosemite Valley including the Mariposa Grove, should become part of Yosemite National Park. The next morning they rode to Glacier Point where the photograph of the two was taken.

The second night they camped near Sentinel Dome. Muir made beds of ferns and cedar boughs and a built a bonfire. Roosevelt described camping “amid the pines and the silver firs in Sierran solitude, in a snowstorm too, and without a tent. I passed one of the most pleasant nights of my life.”

Their third campsite was on the valley floor, near “thundering” falls and fronting “the stupendous rock mass” of El Capitan.  Together, Roosevelt and Muir hiked and camped in some of the most iconic and beautiful sites in Yosemite. The two men enjoyed one another’s company, though a trail guide, Charles Leidig, recalled that both men wanted to do all the talking.

In a speech that Roosevelt gave in Sacramento shortly after parting from Muir, he made a plea for the preservation of the marvels he had experienced in Yosemite. “I ask that your marvelous natural resources be handed on to your posterity. We are not building this country of ours for a day. It is to last through the ages.” When Roosevelt returned to Washington, he began a campaign to add the Mariposa Grove and the Yosemite Valley to the National Park, and in 1906 he signed the congressional bill that made it so.

Want to learn more about Roosevelt and Muir? Douglas Brinkley’s The Wilderness Warrior: Theodore Roosevelt and the Crusade for America and A Passion for Nature: The Life of John Muir by Donald Worster are good places to begin.