Searching for Wolves in Yellowstone

Searching for Wolves in Yellowstone

Whole Earthling Brooke spent some of her vacation this year in Yellowstone National Park. Here's her account of searching for wolves in Yellowstone.

4:30am, West Yellowstone, Montana. Sunrise comes early to Yellowstone in summer. Though I set my alarm for what felt like the middle of the night, there was already light in the sky when I opened the curtains of my motel room. 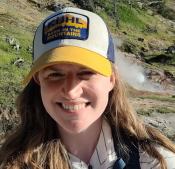 I am not an early riser, but in Yellowstone, the wolves are, and the wolves were the reason I was here. In 1995, wolves were reintroduced to the Yellowstone ecosystem after being eradicated in the 1920’s. Once this apex predator was restored, amazing things happened: the elk populations were reduced, which meant the over-grazed riverbanks recovered and the willow trees returned, and with the willows came beavers.

This morning I was headed for the Hayden Valley, where I thought my chances were best for spotting a wolf. My original travel plans were scuttled by a flood that wiped out the northeast entrance road and cut off access to the historic Lamar Buffalo Ranch where I’d planned to take a class about the relationship between ravens and wolves, so I had to find the wolves myself.

By the time I made it to the Hayden Valley, the sun was well up. I parked my rented Mustang in a pull-off and climbed a small hill, from the top of which I could see the Yellowstone River on one side and the expanse of the Hayden Valley on the other.

I ate a snack and waited. Canada geese honked by the river, traffic rushed by on the road below. A bison stopped to graze by the roadside, and a woman got out of her car and stood too close to take a picture. Far off in the distance, I saw a herd of elk.

Though the early morning had been chilly, the sun was now beating down on me. I was about to give up when I heard a sound coming from the south. I trained my binoculars on a stand of trees a few hundred yards away, but I didn’t see anything. I lowered my binoculars and that’s when I heard it – above the wind and the rush of traffic, I heard howling. 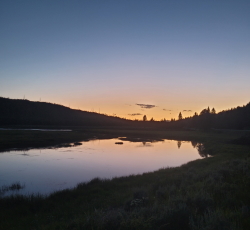 The howls continued for a few seconds and then went silent. I looked around for confirmation of what I’d heard, but all the other wildlife watchers were out of earshot. Not too long after, a couple came trudging up the hill, carrying cameras and binoculars. About a quarter of an hour before they’d seen a pair of wolves chase an elk along the Yellowstone River not a quarter of a mile away, just out of sight from where I was sitting.

Two days later, exhausted by early mornings, I started to look for wolves in the late evening, when they came back out to hunt after the heat of the day. With no particular plan, I’d been trolling through the park when I saw a pull-off jammed with cars, trucks and RV’s.

A man had a scope trained on a dark brown spot far down in the valley. It was a week-old bison carcass, and I’d just missed a grizzly bear who’d come for a snack. But there was another animal still down there, invisible for the moment because it had stopped moving. With the guidance of a fellow wildlife-watcher, I trained my binoculars on the brown smudge by a small dead tree above a clump of sagebrush.  Finally, there was movement: a dark silhouette, dog-like, trotted away from the carcass. I’d found my white whale, and it was a gray wolf. 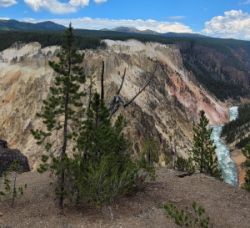