We're lucky here in Austin that there are many breezy days perfect for flying a kite. Several Whole Earthlings at the office keep kites close at hand, and when the winds are right, they're off to a neighboring park for a refreshing break flying kites. These are the folks that created our handy A Kite Flyer's Field Guide for Judging Wind Speed.  And if you live near one of our brick and mortar stores, you'll find a fun assortment of kites for your own flying pleasure. Alas, most of the kites cannot be shipped and are for in-store pickup only.

If you love flying or watching kites spangling the sky, here are a few of our favorite Texas kite festivals you might want to consider visiting in the next month or so, including one in our own backyard. 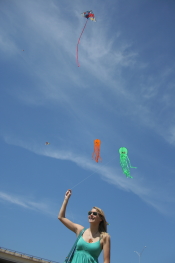 The Zilker Kite Festival is the longest running kite festival in the country, now in its 93rd year. It began in 1929 as an opportunity to "foster creativity in children." And today you can see all sorts of kites flying: homemade kites, store bought kites, kites made by artists and giant kites, all sharing the sky over the field where later in the year, thousands will gather for the Austin City Limits Music Festival. For the past several years, weather for the Kite Festival has not cooperated leading to cancellations. So this year, the Festival has moved to Sunday, April 3rd and will run from 10am to 5pm.  It's a free family friendly event that welcomes pets and hosts MossFest, a children's musical concert alongside a traditional kite flying contest, a kite-making workshop, rock wall climbing, bungee jumping, festival food and more! 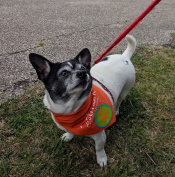 Coming up fast is San Antonio's 15th Fest Of Tails, an ingenious event that combines kites and dogs! This free event takes place on Saturday, March 12th at McAllister Park from 10am to 4pm. You'll find kite demonstrations and family kite flying as well as a Pooch Parade and Costume Contest. The Costume Contest categories include Best Dressed Dog, Most Resembles Owner, and Best In Show. The Pooch Parade begins at 12:30pm. And a new offering for 2022, is the “Tour de Tails,” a bicycle ride along the Salado Creek Greenway ending at Fest Of Tails. Riders begin at Lady Bird Johnson Trailhead (3 miles) or Hardberger Trailhead (10 miles) and cruise their way to McAllister Park.  Bring a blanket or lawn chair to watch the kites aloft and meet some new furry friends.  There will be sweet treats, festival fare, live music and more!

Houston also has a kite festival - the Hermann Park Kite Festival. Back in 2014, Hermann Park celebrated its centennial with a host of activities including its first kite festival. It was so popular that it has become an annual event. This year's festival is on Sunday, March 27th from 10am to 5pm. Located on Miller Hill and around Jones Reflection Pool in the park, it's a free family fun event. There will be a demonstration of acrobatic kite flying and plenty of opportunities to fly your own kite along with other enthusiasts. You'll also find arts and crafts, live music, kids' activities and festival food.

Looking beyond Texas, there are numerous kite festivals across the country and around the world. Here are a few to start you daydreaming if you'd like to let your love of kites take you to some distance shores.

The largest kite festival in North America is the Washington State International Kite Festival. It's a week-long extravaganza organized by the World Kite Museum in Long Beach Washington. This year it runs from Monday, August 15th through the Sunday, the 21st. This will be the festival's 41st year. Events include rokaku battle kites for individuals and teams, sport kite demonstrations, mass ascensions for various types of kites, and a lighted kite night fly. There are workshops, competitions and the opportunity to watch some of the best kite fliers in the world.

You may have seen some spectacular photographs taken at the Festival de barriletes gigantes in Sumpango and Santiago Sacatepéquez in Guatemala. The festivals are part of the celebration of All Saints Day on November 1st. Kites of all shapes and sizes are flown at the festivals but the centerpiece of the celebrations are the huge, brightly colored kites up to 60 feet wide that are handmade by groups of families and friends. Using bamboo, tissue paper, glue and string, teams of kite makers decorate these giant mandalas and include messages for the dead. The kites are flown over open fields and cemeteries to deliver the messages.

While we've already missed this year's festival, mark your calendar for January 14, 2023 for the multiday International Kite Festival in Ahmedabad, Gujarat in India. Founded in 1989, the festival brings master kite makers and flyers from around the world. The sky will be filled with kites from Malaysia, Indonesia, Japan, China, Europe and the United States, both traditional and high tech. And you'll find smaller festivals in other towns and cities in Gujarat that also celebrate kite flying at this time. 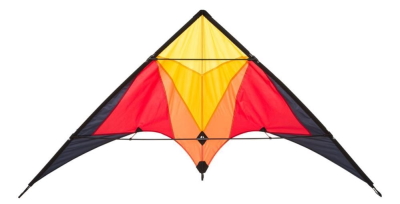