This month’s Whole Earth Hero is H.A. Rey, perhaps best known as the author, along with his wife Margret, of the original Curious George stories. But there’s more to Rey than monkey business. Rey also wrote two books The Stars and a version for children, Find the Constellations, which have helped generations of adults and children find and remember the constellations in the night sky.

Hans Augusto Reyersbach was born in Hamburg Germany in 1898. He spent much of his free time as child at the city’s Hagenbeck Zoo drawing animals. Both Rey and Margret were German Jews. They married in 1935 and moved to Paris where Rey began his career as an author and illustrator. The couple fled the city on self-made bicycles days before Paris fell to the Nazis. Among the few items they carried with them was the manuscript for Curious George. They found shelter in New York where Curious George was published in 1941, the first of seven books about the mischievous monkey. 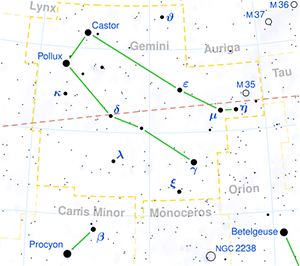 Rey described his method as graphic. He drew connecting lines,  like stick figures, between the stars to create definite, easily remembered shapes. The difference between the geometric image and the graphic image for the constellation Gemini is easy to see. Rey believed that our human eye wants to see shapes with meaning. As an example, he pointed to how we see all manner of creatures and objects in the clouds.

In The Stars, Rey begins by focusing on a small group of three or four constellations, sometimes more, and their surrounding neighbors.  As you move from chart to chart, you begin to get a sense of the relationships among the starry community above our heads.  His accompanying notes are informative and entertaining. Rey moves on to introduce the mysteries of calendar star charts that show where and when to look for the constellations and finishes with information on planets and stars with a handy glossary-index.

Here is Rey’s prescription for learning the constellations:

1. Go outside and look! Don’t be deterred by street lights, moonlight or a few clouds. Find the best spot you can and see what you can see.

2. Take The Stars with you as a reference. Use a red light so you can see the text and the stars. Rey suggests painting the lens of a flashlight red with nail polish.