This year at Whole Earth, we have gifts with a global perspective! From a calendar, to books, a game and even an actual globe, the focus is on our beloved planet Earth. 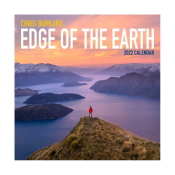 If you enjoy livening up the wall with a beautiful calendar every year, may we suggest Chris Burkard's Edge of the Earth 2022 Wall Calendar. Best known for his stunning photos of surfing and wilderness adventure, you may have seen Burkard's work for Patagonia or on his social media feed. The calendar features photos from Iceland, New Zealand and the Alaskan coast. And if you like these images, consider Burkard's new book, Wayward: Stories and Photographs. He tells the stories behind some of his best known photos as well as sharing many never before published. Wayward Stories will be arriving in our stores in early December. 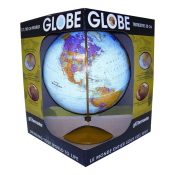 Thanks to digital technology, we have come to appreciate maps as never before. But even so, there's nothing like a globe to see how all those maps fit together on a sphere. A globe brings home facts such as Austin's position near the 30th parallel is similar to that of Cairo, Shiraz, Lhasa and Hangchou! A globe can convey the true size of the African continent and just how much of the Earth's surface is covered by the Pacific Ocean. The Reploge Explorer Globe shows nations, the states making up the U.S., along with major cities, oceans, seas, rivers, mountain ranges (with raised topography), deserts, islands and oceanic features. All this on a 12in diameter desktop globe! Give the gift of a global perspective to the perpetually curious on your gift list (or yourself!). Sorry, globes are for in-store pickup only. 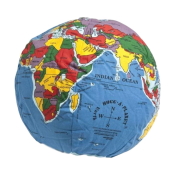 Have there been times when you wished you could give the planet a hug? Whether it's joy and awe as you've experienced the sheer beauty of the Earth or sorrow over disasters and devastation, now you can hug the planet. The Hugg-A-Planet Political Earth is a soft 12in diameter stuffed globe. Think of it as a child's first globe with over 600 places named. This globe is made of cotton, filled with new material and is machine washable. 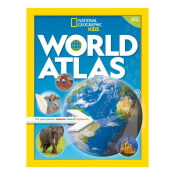 This sixth edition of the National Geographic Kids World Atlas is an excellent first atlas for kids 10 and up. There are introductions to the different types of maps, how they are used, and how to read them including interpreting scale and a key to symbols. The atlas has maps of physical features, climate, vegetation, and migration, as well as regional and political maps. Accompanying the maps are National Geographic photos of people and places around the planet.

Where on Earth? by DK 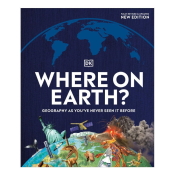 In true DK (Dorling Kindersley) fashion, Where on Earth? gives us the big picture about life on our planet. Starting with landforms, water and climate, it moves on to the living world of plants and animals, with an emphasis on the big and sometimes scary animals. Next up, the book looks at humans and their impact on the planet. The geography of engineering and technical creations includes maps of the internet and satellites and space junk. There are also historical maps tracking empires and wonders, and finally maps that look at culture by way of languages, holy places, festivals and more. The maps are colorful and graphically sophisticated. Many are accompanied by graphs and sidebars of fun facts that further enhance our understanding. There's even a map showing the distribution of mummies around the world. They're not just found in Egypt! Where on Earth? is targeted for kids 9-12, but many adults will enjoy the book as well. We did!

Your Place in the Universe by Jason Chin 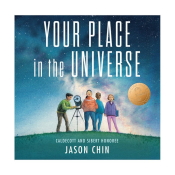 Your Place in the Universe starts small, with a group of eight year olds and scales up from there to ultimately embrace the cosmic web. Not bad for a book of only 40 pages! An eight year old is described as about five times as tall as the book or only half as tall as an Ostrich.  And then there's the giraffe. As we mentioned, it ends with the cosmic web. The last section of the book, "Beyond the Human Scale" looks at the Earth, our solar system, galaxies, as well as the meaning of a light year, looking into the past, and the question of our cosmic address. Your Place in the Universe won the Cook Prize which honors the best science, technology, engineering and math (STEM) picture book for children aged eight to ten as well as several other prestigious "Best Book of the Year" awards. It's a great way for kids to learn about our place in space! 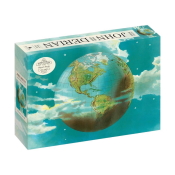 Inspired by the artwork and design of 19th century books, John Derian has created a 1,000 piece jigsaw puzzle of Planet Earth. His Earth is not set against the black vastness of space, but rather hangs in a cloud and star strewn early evening sky. While the image of the Earth does include latitude and longitude lines, there are no other signs of humanity on this physical map. It shows the mountains, deserts, lakes and the icy regions of the far north. If you and the family enjoy doing jigsaw puzzles over the holidays, this may be a good one to add to your collection. 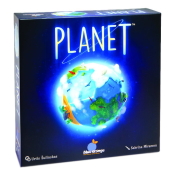 Want to try your hand at planet building? With Blue Orange Games Planet, you and the other players can each take on creating a planet using the magnetic dodecahedron planet cores and placing continent tiles to create environments suitable for the wildlife that was dealt for the game. The tiles have mixed segments of forests, mountains, deserts, ocean and ice. The winner will have created the best world for the wildlife on their planet. The game is played in 12 turns so it won't drag on for hours. The game comes with four planet cores, 50 continent tiles, 45 animal cards, 5 habitat objective cards and a first player token. Strategy plays a role in the game, and there are variations for play as well. 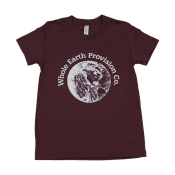 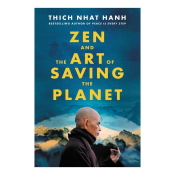 Thich Nhat Hanh is a Vietnamese Zen master who has worked tirelessly for peace for well over half a century. He has written many books and led retreats around this world. Zen and the Art of Saving the Planet collects his teachings on deep ecology, engaged action, community building and collective awakening drawn from his writings, talks, interviews and question and answer sessions. The root of his teaching is Mindfulness - learning to clear away the distractions and habitual thoughts that cloud our understanding and influence our actions. When we are able to mindfully observe both ourselves and our world, we can better see the actions we might take to transform our lives and to help create societies where respect for the Earth and the beings who call it home, including us, become a reality.

Saving Us: A Climate Scientist's Case for Hope and Healing in a Divided World by Katharine Hayhoe 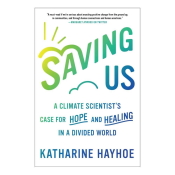 Another voice calling us to respond quickly and effectively to our climate challenge is Katherine Hayhoe, an evangelical Christian who is a distinguished professor of Public Law and Public Policy at Texas Tech. She is also the chief scientist for The Nature Conservancy. In Saving Us: A Climate Scientist's Case for Hope and Healing in a Divided World, she points out that the planet does not necessarily need saving. It will continue on no matter what we do, but we humans and the other living beings on the planet, for whom Christians believe they have been given responsibility, will not survive if we do not change our ways. Hayhoe believes that the most important thing we can do to address climate change is to talk about it, and in Saving Us, she shows us how we can change hearts and minds through small conversations based on facts and the discovery shared values. These conversations can change minds and lead to collective action that may save us all.

Sometimes it can be difficult to take in the larger view of life on our planet. By nature we are more concerned with our lives in our particular place. These items offer a few reminders that can help us see and live on the Earth in new ways.