Edward O. Wilson and the Encyclopedia of Life

Our Whole Earth Hero for the month of May is Edward O. Wilson, a biologist, naturalist, author and the world’s leading expert on myrmecology, the study of ants. For many years Wilson has been an advocate for protecting our planet’s biodiversity.

“Sadly, our knowledge of biodiversity is so incomplete that we are at risk of losing a great deal of it before it is even discovered. For example, even in the United States, the 200,000 species known currently actually has been found to be only partial in coverage; it is mostly unknown to us in basic biology. Only about 15 percent of the known species have been studied well enough to evaluate their status. Of the 15 percent evaluated, 20 percent are classified as "in peril," that is, in danger of extinction. That's in the United States. We are, in short, flying blind into our environmental future. We urgently need to change this. We need to have the biosphere properly explored so that we can understand and competently manage it. We need to settle down before we wreck the planet. And we need that knowledge.”

One tool that Wilson believes that can help us preserve Earth’s biodiversity is the Encyclopedia of Life. He envisioned it as an online encyclopedia with a webpage for every species that would include basic information, photos, maps, articles and data. The consolidated information would be freely available to researchers, citizen scientists, students and other interested individuals.

In 2007, Edward O. Wilson won a $100,000 TED Prize and used it as seed money for the creation of the Encyclopedia of Life or EOL. The Encyclopedia went live online on February 26, 2008 with 30,000 entries. Its goal is to document all of the 1.9 million living species now known as well as new species that are being discovered every year.

The EOL includes information about single cell organisms (protists), viruses, bacteria, fungi, plants and animals. If you’re looking for the big picture on the types of life found on Earth, visit EOL online and look at the bar near the bottom of the page. Click on the life form that interests you and you’ll be taken to a page with a brief introduction. Or if you have a specific creature or plant or virus in mind, use the search bar in the upper right hand corner. 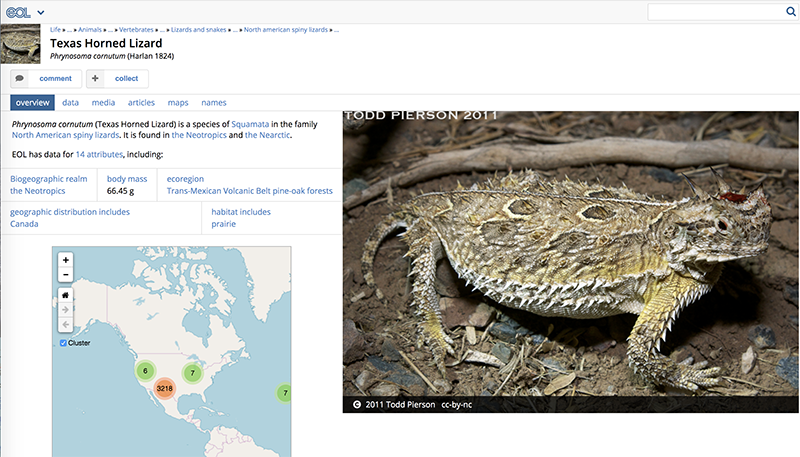 Let’s pay a visit to one of our favorite Texas critters - the Texas Horned Lizard. We immediately discover that the EOL has 847 photos, 58 data collections, and 20 articles on Phrynosoma cornutum. Click on its photo and you’ll land on the overview page. In the data tab you’ll find information about where the Texas Horned Lizard lives, its size, how it feeds (ambush predator!) and much more. Media takes you to enough photos to make any mother lizard proud. Articles include such interesting tidbits as despite its fierce appearance, the Horned Lizard is actually quite docile. And, in Texas, they are under threat due to Fire Ants and the pesticides used to kill them. The pesticides also kill Harvester Ants which are the chief food of the Texas Horned Lizard. On the maps tab, you may be surprised to see sightings of the Texas State Reptile on the North and South Carolina coasts. And finally on the names page, the common and scientific names are found along with the Horned Lizard’s place in the hierarchies of various taxonomies of life.

The EOL is not without some confusion. Try looking up Texas Bluebonnet, and you’ll find yourself looking at seeds for an Australian plant. But if you search on Lupinus texensis, bingo, there’s our beloved state flower.

Edward O. Wilson has given us a great gift with the Encyclopedia of Life. Created as a tool for science, it is also a window out onto the vast and astonishing world of life with which we share the planet. It’s a browsers delight. Dive in! There’s no telling what you might find.