Chaco Gives Back to Enchanted Rock

Chaco Gives Back to Enchanted Rock

Chaco Gives Back returns to Whole Earth Provision Co. starting June 22nd and running through July 8th. During these two weeks, for every full price pair of Chaco shoes and sandals purchased at Whole Earth stores or online, Chaco will donate $5 to the Friends of Enchanted Rock. This year’s funds will be used as seed money for an exciting new project – a much needed and long desired Dark Sky Viewing Area and Observatory! 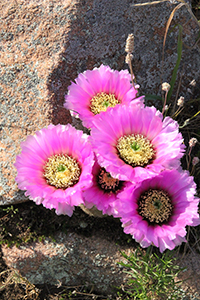 Chaco Footwear, known for their ‘go everywhere, do anything sandals,’ is a very generous contributor to local causes. Since 2008, they have contributed over $44,000 to the Friends of Enchanted Rock in response to purchases made at Whole Earth stores. The Chaco Gives Back funds have been used for many projects including retrofitting antiquated plumbing fixtures in the Park to low-flow water saving systems; providing funding for visitor trail maps; improving the trail system by reclaiming areas where small game trails had turned into human ones, causing erosion; purchasing recycling receptacles for the Park; adding Elkay filtered water stations that include taps for the easy filling of reusable water bottles; and last year, creating a rainwater collection system for the landscaping around the Park headquarters building.

Enchanted Rock is a truly magical place. The exposed pink granite batholith reaches an elevation of 1,825 feet, offering a magnificent panoramic view of the surrounding Hill Country. The rock is ancient, perhaps a billion years old and has been called the Heart of Texas. Enchanted Rock State Natural Area covers over 1600 acres and is host to over 500 species of plants that live in the Park. Wildlife found in the park includes birds, bats, lizards, squirrels and fox. Park visitors can enjoy hiking, camping, rock climbing, birdwatching and, of course, stargazing. 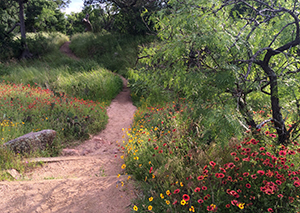 The Friends of Enchanted Rock (FOER) is a volunteer, non-profit organization founded in 1999. Their mission is to work in partnership with Texas Parks & Wildlife to promote conservation of Enchanted Rock’s natural and cultural resources through preservation, education and improvement efforts. FOER is the first and only official support group dedicated to the conservation and protection of Enchanted Rock and has received support from other Whole Earth Community Partners – Texas Climbers Coalition and Texas Parks & Wildlife and through community events like the Granite Gripper Climbing Competition.

Chaco Footwear is ‘Fit for Adventure.’ Their signature adjustable nylon sandals put Chaco on the map for outdoor enthusiasts around the world. Their popularity has grown through the years and styles now include casual footwear and shoes, which you can find at Whole Earth stores and online. So if you have been thinking about purchasing a new pair of Chacos, now is the time! You’ll have a great pair of shoes or sandals, and you’ll help keep Enchanted Rock a magical place, today and for generations to come.