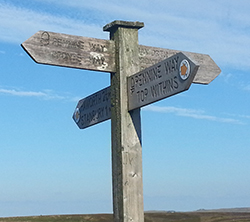 Working at the gear counter at Whole Earth, a lot of my job involves helping people prepare for trips. I’ve helped people pick gear to run the Everest Marathon, hike Kilimanjaro and go on countless safaris. I’m happy to help customers pick out sleeping bags and duffels, bug spray and sometimes even bear spray, but, I’ll admit it: sometimes I get jealous. When do I get to deploy the bear spray? However, one of the great things about being a Whole Earth employee is that sometimes I do get the chance to go out and test the gear for myself. I spent the last month hiking through England and Scotland, with my world on my back. Now, before you get jealous, let me just tell you: it was no walk in the park – it was a walk through three parks, and about six thousand sheep fields. I was hiking the Pennine Way, England’s oldest long trail, populated mostly by sheep and retired men from Manchester and Leeds. 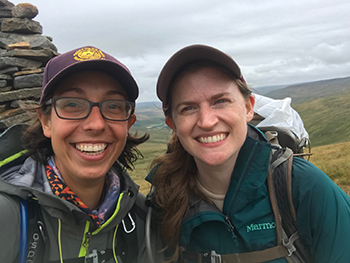 Though I was looking forward to scenes of pastoral solitude, of course, in the end, it was the people I met who were the most interesting. About halfway through the trail, I met a German girl around my age who’d quit her job to hike in the UK for three months. We met at a campsite one morning, ate fish and chips together in a village that afternoon and hiked the rest of the trail together.

In County Durham, about two thirds of the way through the trail, we were crossing one of the six thousand sheep fields, when we saw a farmer up ahead of us, standing in front of his herd of sheep. He was behind a closed gate, and when we got within earshot he said, “Maybe you can help me.” He needed someone to open the gate, so he could shoo out the four white-faced sheep his dog had separated from the rest of the herd. He’d been spending the morning with his Border Collie trying to separate these four sheep from the rest of the herd but, as he said, “The sheep are decidedly uncooperative this morning.” 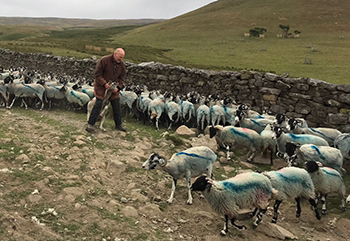 Of course, the moment I opened the gate, all the sheep spooked and the four sheep he was trying to cut out of the herd got mixed right back up in it again. In the end, my friend asked if there was anything else we could do to help him and he said, “Well, if you open the gate, I can separate them myself.” I was the lucky hiker who got to man the gate, and I watched this Durham sheep farmer wade into his herd of sheep, make a considered lunge, and grab a sheep by the tail and half-drag, half-steer it toward the gate where I was waiting to fling it open. He separated all four sheep this way, in one case lifting a sheep entirely off the ground before launching it through the gate. Afterwards, he thanked us for our help, hopped on his four-wheeler with his Border Collie and drove down the hill, waving to us as he went.

I’ll never see that sheep farmer again, but I was delighted to have the opportunity to dabble in animal husbandry. My main takeaway was that sheep farming, like so many things in life, is not an exact science. Also, maybe sheep aren’t so different from people, after all. As the farmer told us, “Sheep want to be anywhere they’re not; it’s their nature. The grass is always greener, even when it isn’t.”