June was a wild month. I was scheduled to be playing every Saturday night in Las Vegas at Harrah’s Casino with the band Fastball. Being someone who doesn't drink or gamble, I knew I needed to come up with a plan to spend as much time out in the surrounding mountains as I could. Every week we’d fly in on Friday night and out on Sunday morning. I learned, week one, to pick up a rental car for myself as soon as we landed. 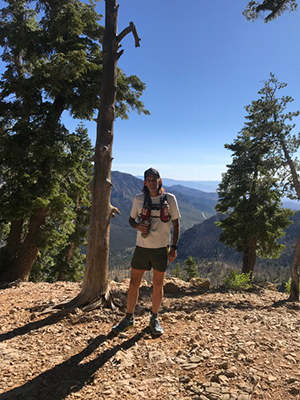 Being a touring musician and trail runner, I’m used to scouting for info on where to run in any given town. But this was a little different as most of the places I wanted to go were at least an hour away. Week one I asked a friend, John Wicks, drummer for Fitz and the Tantrums, if he had any tips as I knew they played in Vegas a lot. John suggested Red Rock Canyon National Conservation Area and particularly a trail called Calico Basin.

I woke up early Saturday morning and headed out. It was amazing. Taking it easy so I’d be sure to get back for soundcheck and in time to rest a little before the show, I headed back after a couple of hours of running and scrambling amongst the giant red rocks. The weekend went well, and I learned the drill for the rest of the month. 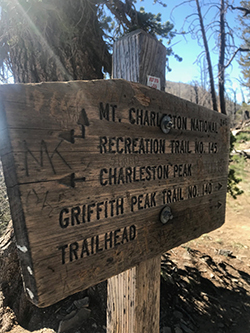 Weekend number two I wanted to get out to some real mountains. I had been talking with some people in the Las Vegas Trail Runners group and knew I needed to get out to Mount Charleston. I got up about 5 am to get out there at Sun up to allow myself time to get to the top, 11,916 feet, back down, and back to Vegas for showtime. As I pulled into the parking lot at the trailhead there was a couple, John and Liz, getting out of their truck. I asked them if I was in the right spot, and they offered to let me start out with them to get me going in the right direction. After chatting it up on the way to the top, we decided to stay together the whole way. Friends made at altitude!

I had received a new Suunto Spartan Sport HR through the Ambassador Program with Whole Earth and was excited to see how well it tracked the vertical gain. Not being entirely familiar with the new watch, I decided to run Strava on my phone as a back up, so I could compare data later. The two were almost identical over some tricky switchbacks and fast descents. I was pretty impressed.

After we made it back to our cars, my new friends offered to take me out running in another area the next weekend. This is best thing you can hope for as a musician on the road: make some friends who know the area. It can really save you some time and headache wandering around trying to find the trailhead.

Weekend three I uber-ed out toward their end of town. They picked me up at a Starbucks, and we headed to Black Mountain, one of the more prominent mountains in the McCullough Range south of Vegas. We ran for a few hours, summited both Black Mountain and Park Peak, and that evening, my friends came to the show.

Sunday morning it’s up early and back to Austin. I’ve always kind of dreaded playing gigs in Vegas. It’s a strange place. But now I’ll be looking forward to seeing the friends I’ve made there through trail running.