BioLite – For Your Off-the-Grid Life

BioLite – For Your Off-the-Grid Life

A camp stove that can charge your phone sounds improbable, but it’s true! It’s just one of the off-the-grid energy solutions offered by BioLite. Focusing on renewable energy, the company uses solar and biomass material for cooking, lighting and charging electronic devices. And a BioLite purchase helps support their engineering and design solutions that bring clean energy to families in Africa and Asia.

BioLite was created by inventors Jonathan Cedar and Alexander Drummond in 2006.  They were interested in portable stoves that combined local sources of wood with battery-powered fans. Their idea evolved into a low-emissions stove that used a thermoelectric generator.  Realizing that their stove could have an impact far beyond the world of camping and outdoor recreation, they divided the company into two branches, one based in Brooklyn and the other in Nairobi, Kenya. 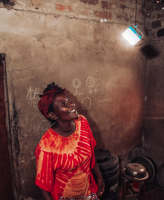 BioLite’s motto is “To empower people and protect our planet” through access to renewable energy.  Access to electricity is limited for over a billion people on our planet. They’re forced to rely on energy sources that can impact their finances, time and health. Perhaps the most transformative tool in Africa and Asia in the past two decades is the mobile phone. But with no way to recharge it at home, many cannot use it for communication and to build a better life. Without interior lighting, work and study stop when the sun goes down. And cooking over an open fire not only exposes the cook to potentially toxic fumes and serious health impacts, it’s also a major contributor to planetary carbon emissions. Open fires produce a staggering 25% of global black carbon emissions. This is more than all the world’s cars and trucks combined.

To date BioLite has brought renewable energy to over 1.7 million people, generated almost 2 million killowatts of electricity, and offset over 457,000 tons of carbon dioxide emissions. And some of the same BioLite products that have made such a difference in Africa and Asia are available here in the United States for use by campers and outdoor adventurers. 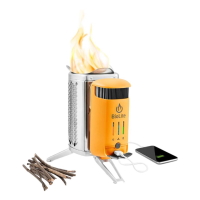 The BioLite CampStove 2+ uses sticks, pinecones and other small pieces of wood to create a high intensity fire for cooking and for charging phones or other outdoor gear. The stove has two parts – a cylindrical metal combustion chamber and a bright yellow battery pack. The combustion chamber is loosely filled with sticks and lighted. As it burns, the CampStove2 uses thermoelectric technology to convert temperature differences between fire and air into an electric voltage, which powers a fan that improves fire combustion. Excess electricity generated while cooking can is stored in the battery and can be used to charge USB-powered devices such as mobile phones and LED lights. You can pre-charge the battery pack before you head out. The battery dashboard indicates the strength of the fire, fan speed and the amount of power in the battery. The battery can be used separately for charging without the presence of a fire.  For carrying, the battery nests inside the combustion chamber and has its own stuff sack. 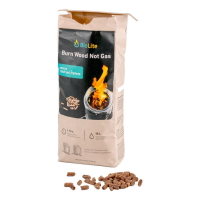 If you’re concerned about having good fuel on hand when you use the CampStove 2+, you may want to stock up on BioFuel Pellets. Sometimes campsites have been scoured clean of sticks and deadwood or there may have been rain in the area leaving potential fuel too damp for use. Perhaps you haven’t had time to gather fuel from yard trimmings or to chop some fat kindling pieces. If so, consider using  BioFuel Pellets. They’re food safe, and a bag can provide two hours of cooking and charging 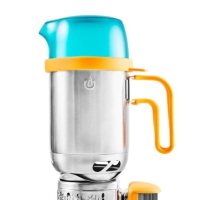 So now you have your CampStove 2+ and fuel for the fire. It’s time to cook! The BioLite CampStove KettlePot is made for use with the stove. The stove’s scalloped top was made to hold the stainless steel KettlePot securely in place over the fire. And true to its name, it can be used as a kettle or a pot. Whether you’re hydrating your dinner, steaming some veggies or making soup or stew, it’s a one pot wonder when it’s time to eat. The KettlePot also doubles as a carrying case for the CampStove 2+!

There’s one more piece of kitchen gear you may want to add to your CookStove 2+ collection: the BioLite KettlePot CoffeePress! If you need a good cup of coffee to start your day, this French-press style insert will turn your KettlePot into a coffee maker! The CoffeePress is lightweight, has a good seal and is easy to clean. Your CookStove 2+ can heat up a liter of water in 4.5 minutes so you won’t have to wait long for the first glorious cup of the day. 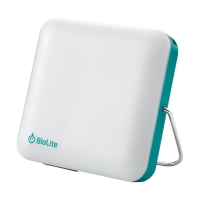 If the winter storms here in Texas left you in the dark, or you want to be prepared for the next outage due to a thunderstorm, the BioLite SunLight 100 Lantern, would be a good light source to have on hand. It’s a 100 lumen dimmable light that can be charged with a USB cord or by the sun. The built-in solar panels include a sundial to position the lantern for optimal charging. Its small size makes it easy to stash in a pocket, carry as a flashlight, pack for a trip, or to store at home until needed. The stand and clip make it easy to direct light where you want it in a tent or at home.

BioLite is back at Whole Earth! We’re proud to carry their gear for cooking, lighting and charging electronic devices. We also like their goal of bringing more of the world’s people out of energy poverty and doing it with the planet in mind. Take a look at BioLite in the Gear Department in our stores and online. We think you’ll like what you see.