Archie Carr (1909-1987) was an American Herpetologist who became known as the Turtle Man. His research into the life of sea turtles brought to light the steep decline in their numbers around the world. Together with other scientists and conservationists, he created preserves where sea turtles could nest undisturbed and worked on solving the mysteries of where sea turtles go when they return to the ocean after laying their eggs.

Carr was a conservation biologist before the term existed. Through his research, writing and teaching, he gathered and shared much of what was then known about the life histories of sea turtles. He had a great ear and love of languages which is amply shown in his books and papers. His writing style is both lively and authoritative. He won both an O.Henry award for short stories and the John Burrough’s medal for nature writing. 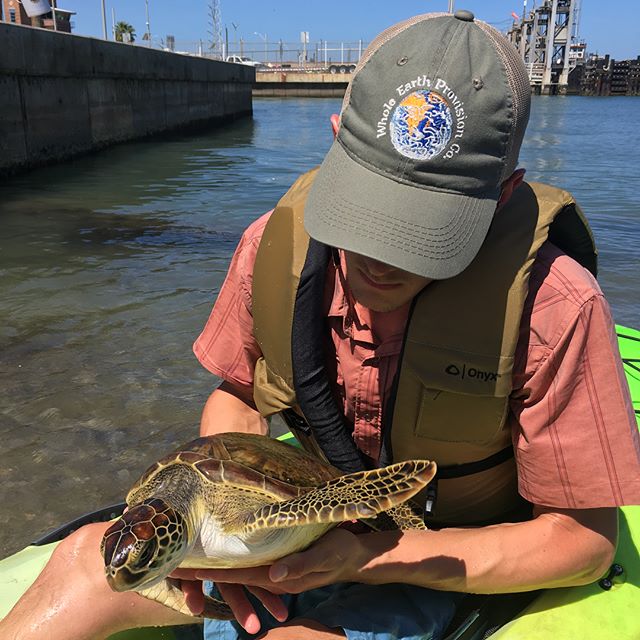 His research on the life of sea turtles and the challenges they faced to survive led to the creation of Tortuguero National Park in Costa Rica which includes the second largest nesting beach for Green sea turtles in the world. Carr’s work not only preserved the nesting beaches but worked to create new ones. “Operation Green Turtle” distributed Green turtle eggs and hatchlings from Tortuguero to beaches around the Caribbean and the Gulf of Mexico with the hope that the hatchlings would imprint on a new beach and return to it when the turtles matured. Dispersing the nesting sites through the Gulf could increase the numbers of surviving eggs and hatchlings, rather than having so many in one place and more open to predation from humans and other animals.

One of the great unsolved mysteries for which Carr sought answers back in the 1940s was where or even how Kemp’s Ridley sea turtles propagated. Fisherman said they didn’t. Being a good zoologist, Carr discounted that answer, but the question remained – where?

Progress was slow. Carr noted that there was evidence that Kemp’s Ridleys did come in male and female forms, that the size of a mature turtle was known, and that hatchlings had been seen. But where were the nesting grounds? He longed for a dramatic answer rather than the slow dribble of facts gathered over time. His wish came true.

For years rumors spread concerning a film that showed thousands of sea turtles coming ashore and laying their eggs in Mexico. Henry Hildebrand who was a professor of Biology at the University of Corpus Christi, now Texas A & M University – Corpus Christi, followed up on turtle sighting along the Texas and Mexican coasts and found the photographer and the film. He invited Carr for a preview prior to the meeting of the American Society of Ichthyologists and Herpetologists in 1961, to identify the turtles, hopefully as Kemp’s Ridleys.

Carr describes the moment in a classroom on the University of Texas campus in Austin:

‘The lights went out. A switch was snapped and the screen lit up with an aerial view of a long straight beach, bordered by broad surf, like lace between ivory sand and the deep blue of a wind-whipped sea.

Then the scene changed and an airplane stood on the beach, and another was coming in for a landing. When the second plane stopped a man got out, walked a short distance, then began to dig up turtle eggs. Some more men appeared from somewhere and joined him beside a monumental heap of turtle eggs they had dug out of the sand.

It was the most turtle eggs I ever saw in one place. They were little eggs, obviously not those of a green turtle or a loggerhead and the next scene showed why, because suddenly a turtle was there busy with her work digging a nest. The turtle was …Lepidochelys kempi [Kemp’s Ridley], which some people said didn’t lay eggs at all, but she was out there in the full sunlight of a brilliant Mexican morning, violating the inflexible sea turtle custom of nesting after dark.

…Finally [the cameraman] turned his lens down the shore. And there it was, the arribada as the Mexicans call it – the arrival- the incredible culmination of the ridley mystery. Out there, suddenly in clear view, was a solid mile of ridleys.' 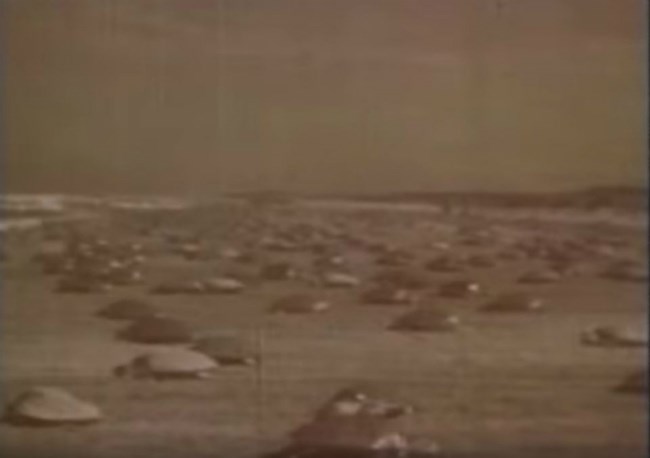 It was estimated that there were 10,000 sea turtles on the beach at Rancho Nuevo that day, and perhaps 40,000 turtles came ashore during the four days of the arribada. But the turtles were in trouble. The film was made in 1947. By 1970, the Kemp’s Ridley was declared an endangered species. What happened? Three factors lead to the staggering decline in the numbers of Kemp’s Ridley sea turtles: the wholesale destruction of sea turtle nests to sell their eggs as a delicacy in Mexico and Texas, the hatchlings being eaten by predators, and turtles becoming entangled in fishing nets and drowning.

Using methods that had proved beneficial at Tortuguero, the US and Mexico worked to protect the nesting site at Rancho Nuevo from predators, including humans. They also created secondary nesting sites including one at the National Seashore on Padre Island. For ten years, from 1978 through 1988, approximately 2000 Kemp’s Ridley eggs were shipped each year from Rancho Nuevo to Padre Island where the eggs were buried and hopefully the hatchlings would imprint the island’s beaches and return there when their time came to lay eggs. Kemp’s Ridley sea turtles are now returning to beaches on Padre Island, but after a surge, the numbers of sea turtles are declining once again.

Despite a partial use of TEDs, Turtle, Excluder Devices on fishing nets, many fishing boats are not using them, so many turtles continue to drown. For the most part, Kemp’s Ridley sea turtles live in the Gulf of Mexico. The Gulf has become more polluted over the years as a result of catastrophes like the Deepwater Horizon oil spill. Trash in the Gulf is another serious problem. Sea turtles can mistake plastic trash like bags for one of their favorite foods - jellyfish. Plastic is indigestible and can cause internal injuries. So much work remains to be done in saving the Kemp’s Ridley and other sea turtles for future generations.

Today, the Sea Turtle Conservancy carries on Archie Carr’s work. If you’d like to learn more about Carr and sea turtles, we recommend Carr’s books, So Excellent a Fishe: A Natural History of Sea Turtles or The Windward Road: Adventures of a Naturalist on Remote Caribbean Shores.  June 16, Archie Carr’s birthday, was chosen as International Sea Turtle Day, a day to honor these ancient creatures and bring awareness of their plight and as a salute to the man who did so much to save them.